Did you know the rights of African American men in Northeast Washington, D.C., are being violated every day?

The Metropolitan Police Department enforces a designated unit, the Gun Recovery Unit, to scour the streets of Washington, D.C. every day for illegal firearms. Even though Metropolitan police have seized thousands of illegal weapons, their aggressive search tactics target residents in heavily patrolled neighborhoods based on their race, and their procedures are a grave miscarriage of justice.

The District of Columbia’s Metropolitan Police Department established the Gun Recovery Unit (GRU) in 2007 and has about thirty members patrolling the streets of D.C. in search of illegal guns. The officers patrol areas that are known to have a higher rate of crime, such as Northeast Washington, D.C., in unmarked vehicles, plain clothes, and vests that are marked “POLICE.” When they come across individuals that they believe to have an illegal firearm, the GRU officers will pullover, exit their vehicle, and confront those individuals. These officers will ask the individuals whether they have a gun on them, if they could lift their shirt to expose their waistband, and if the officers could search them. Even without consent, the officers nonetheless will conduct a stop and frisk without any reasonable suspicion of a crime occurring. 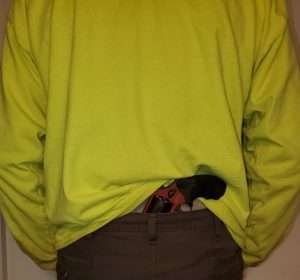 The GRU squad has recently come under heavy civil rights scrutiny because it is often found that these individuals were not observed engaging in any illegal activity, so there was no reasonable suspicion that would have justified stop in the first place. Simply put, they often search young black men walking in a neighborhood in which they live simply for being black and not wanting to engage in any conversation with the police.

More than one-third of suspects arrested on gun possession charges in Washington, D.C., end up getting their cases dismissed. Because of this, residents in heavily patrolled areas feel racially profiled. These residents have dubbed these stops as “jump-outs,” and to avoid being frisked by a jump-out crew, they will hold up their shirts when a police vehicle drives by to show that they do not have a gun in their waistband.

Nevertheless, the Gun Recovery Unit officers continue to stop individuals based on the mere fact that they are of African American descent and present in a high crime area. It is unconscionable and worth noting that neighborhoods with majority affluent residents are not targeted by the GRU.

For a person to be searched without a warrant and prior to an arrest, there must be reasonable, articulable suspicion of criminal activity before initiation of a police encounter. This is an investigative stop, which is only permitted if all of the facts at the time would lead a reasonably careful police officer to believe that the stop is justified because criminal activity may be in progress.

Factors that may lead officers to believe criminal activity could be in progress, and the stop is justified include the time of day, flight, high crime level of the location, secretive movements, an informant’s tip, a person’s reaction to questioning, a report of criminal activity or gunshots, and viewing of an object or bulge indicating a weapon.

Officers must look at all of the facts together to form reasonable suspicion. Even if only one of those factors are present such as the crime level of the location, courts have said that being present in an area with a high concentration of illegal activity is not enough to justify a stop and frisk. Therefore, it is maintained that pervasive searches with no reasonable basis are a grave miscarriage of justice.

The Fourth Amendment of the U.S. Constitution protects individuals against unreasonable searches and seizures. This means that individuals do not have to be subject to a stop and frisk along a sidewalk or at a bus stop unless there is reasonable suspicion to believe that criminal activity is afoot.

The Gun Recovery Unit’s searches are often unwarranted, based on no reasonable suspicion, and merely the fact that an individual is present in a high crime area. This is a serious deprivation of life and liberty. Because the means of their searches often have no legal basis and are extremely intrusive, the constitutional rights of these residents are being violated.

While the GRU patrols the neighborhoods of Northeast D.C., they are targeting the African American residents that live within them. They claim their only goal is to get illegal guns off the streets of Washington; their ends justify their means, and they do not care if they are violating citizens’ constitutional rights in the process.

Initiative 81 Passes in the District of Columbia
The Capitol Insurrection