This past Fall, the District of Columbia, was placed center stage on one of the most divisive topics – the decriminalization of sex work. D.C. proposed the Reducing Criminalization of Commercial Sex Amendment Act of 2019 to D.C. Council.

The controversial topic is being viewed as an alternative solution for mitigating the negative impacts prostitution has on communities. In Washington D.C. specifically, the rates of sex-related charges have nearly doubled between 2017 and 2018, with a jump from 228 cases to 551 cases, respectively.

When it comes to combating prostitution, there are three main schools of thought within the context of modern society. The first is what most of the world, including the overwhelming majority of the United States, operates under, which is complete criminalization. This applies to those providing the service, as well as those who are attempting to purchase the service.

Another model used is the Nordic Model. Named for its regional origin, this model was first implemented in Sweden before being propagated to many other countries in the European Union. The Nordic Model attempts to take a feminist, victim-centric arc on sex work by decriminalizing the sale of services, but continued criminalization of its purchasing.

The idea is that sex work is a trade that victimizes its participants, by legalizing its sale, sex workers do not have to worry about their work being held against them as they move on in their lives. On the flip side, it disincentivizes the continued facilitation of this trade via the act of soliciting sex workers. 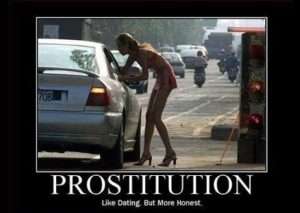 Since being implemented in Sweden, its Interior Ministry has reported a near halving of prostitution. The nation represents the country with the highest cost for prostitution.

The third most common system is complete decriminalization. This model, used in places like New Zealand and Denmark, is an attempt to bring the practice more above ground. It has allowed sex workers to organize for higher pay and benefits such as health insurance. This has legitimized the practice as a true industry and trade within the economy. By decriminalizing, this provides less incentive for trafficking because the trade itself can be conducted above board.

Decriminalization is far from a perfect system. It perpetuates a narrative of sexism within society that not just normalizes but codifies the right men have over women by extending legality towards the purchasing of their bodies simply for gratification.

Additionally, there is no substantial evidence indicating decriminalization lowers the amount of prostitution or lowers the amount of sex trafficking. Instead, its nature simply changes. Now, the law provides cover for brothels to open and bring in women from abroad under the perception they are independent entrepreneurs who come to work willingly.

Almost identical to an attempt made by Councilmen Grosso in 2017, this most recent bill attempts to tackle the rise in sex-related crimes in D.C. by taking a decriminalization approach to both those selling and purchasing sex work.

Known as the Reducing Criminalization of Commercial Sex Amendment Act of 2019, this second attempt comes with 3 co-authors, raising the profile and legitimacy of this attempt.

The bill comes at a time when the rate of sex-work arrests is rising inside D.C. As a response, the Mayor’s office has attempted to stem the tide through the establishment of the Office of Victim Services and Justice Grants. The organization is designed to implement arrest diversion programs for those convicted of sex work.

Metropolitan Police, in conjunction with federal authorities, have also been cracking down on various web services commonly used in soliciting prostitution, including sites like Backpage, and even Craigslist. Some believe these actions are in poor judgment and are making the situation worse for many involved in the trade.

Sex Workers Advocates Coalition, a special-interest group working in the D.C. area, has expressed concerns regarding such an approach. Alicia Gill, a spokeswoman for the group, expressed issue with the underlying nature of the diversion program, as it relies on people being arrested and entered into the criminal justice system with a sex-work related crime on their record. This practice harms both consenting adults engaged in sex work but also penalizes victims of trafficking.

Instead, the group is in support of decriminalization, but they are not in favor of this current bill. The coalition, along with various other groups and individuals, even those who approve of decriminalization, have been disappointed in the lack of services provided to those victimized under the current version of the bill. The bill does not include provisions to automatically expunge the criminal records of those involved in sex work, which is a crucial factor the organization feels needs to be included.

Sex Workers Advocates Coalition is far from the only dissenting special-interest group opposing the bill. Courtney’s House and Rights for Girls, two other highly vocal and relevant organizations, have expressed their opposition to the bill.

Felicia Henry, a spokeswoman for Courtney’s House, noted the bill proposes nothing substantive to provide support for those harmed by the industry, nor does it adequately stem the tide of the growing sex industry in the District.

Yasmin Vafa of Rights for Girls prefers partial decriminalization paired with support programs for trafficking victims as an alternative. In either case, it is clear the Reducing Criminalization of Commercial Sex Amendment Act of 2019, remains highly unfavorable among both the constituents and special-interest groups of Washington, D.C.

Is Sugar Dating Prostitution?
The Dangers of Swiping Right