On January 6, 2021, the United States Congress convened in a joint session to certify that President-Elect Joseph Biden won the 2020 Presidential Election over incumbent President Donald Trump. Prior to the joint session beginning, President Trump told his supporters that the election was rigged against him, and that he had actually won and the victory was being stolen from him, despite losing or withdrawing more than fifty election-related lawsuits since November. 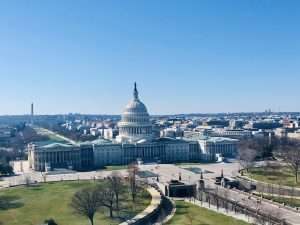 Trump’s words of encouragement and support emboldened the rally-goers to march on the Capitol to prevent the certification of the election.

Hundreds of people entered, leading to a complete lockdown of the Capitol as the House and Senate floors soon filled with insurrectionists. The riot was not only violent, and inherently anti-democratic, it was also deadly. Five people died during the chaos and dozens were injured, including Capitol Police officer Brian Sicknick, age 42, who was beaten to death by the mob as he protected the institutions of our democracy.

Outrage spread across the nation as images of rioters inside the halls and chambers of the Capitol began to be broadcasted. Activists and leaders across the aisle pointed out the glaring differences in how Capitol Police prepared for the peaceful Black Lives Matter protests over the summer compared to the complete lack of preparation on January 6th. This, coupled with the shockingly low number of arrests, has led to accusations of white privilege allowing rioters to storm the Capitol and leave freely. As a result of the anger towards an attack on our democracy, and the apparent racism inherent in the attack, the FBI has asked the public for assistance in identifying those who stormed the Capitol, vowing to hold them accountable.

The most likely charge against those involved in the riot is Unlawful Activities on Capitol Grounds and in Capitol Buildings: 40 U.S.C. § 5104. This law encompasses many activities, the most relevant of which are forcefully or violently entering Capitol grounds, or illegally trespassing on the grounds. This law likely applies to those who entered the Capitol, as well as those who damaged property or behaved violently. Most of the violations under this statute carry fines and up to six months in prison. The presence of firearms, or other dangerous weapons, in conjunction with a violation of this law can result in up to five years of prison.

18 U.S.C § 1361, a law against vandalism of government property, typically carries fines and a maximum of one year in prison. However, if damages exceed $1000, the punishment may be increased to up to ten years of imprisonment. Similarly, 18 U.S.C. § 641, which outlaws the theft of government property, carries a maximum punishment of fines and up to one year in prison, provided the item stolen is less than $1000. If it were more than $1000, they may be punished by up to ten years in prison.

There are a number of crimes against persons that riot may be charged with. A violation of 18 U.S.C. § 111, which deals with assaulting, resisting or impeding Federal officers, carries a punishment of between one and eight years in prison, depending on the degree of assault against the officer. Federal prosecutors are also considering a number of charges related to unlawful killing, the most severe of which, felony murder, involves an unlawful killing carried out during the commission of another felony, such as any of those mentioned here.

Lastly, there are a number of crimes against governmental authority that Federal prosecutors are considering. Treason, for example, is the most serious offense against a government authority, but is unlikely to be charged in this case, particularly given the uncharted territory of charging this crime. It is more realistic, however, that individuals be charged with insurrection, which bars rebellion or insurrection against the U.S. government. This charge carries fines and up to ten years in prison, as well as barring convicted insurrectionists from holding public office. Finally, 18 U.S.C. § 2384 outlaws seditious conspiracy in which two or more people conspire to “prevent, hinder, or delay the execution of any law,” among other attempts to prevent governmental authority from being exercised. Violations of this statute carry a maximum punishment of fines or up to twenty years in prison.

The exact charges levied against the individuals involved in the riot will vary tremendously depending on their degree of involvement in the storming of the Capitol. Regardless, it is clear that hundreds will be charged in connection with the events on January 6th, and many will face time in a federal prison.

D.C.’s Gun Recovery Unit; A Means to Terrorize Black Neighborhoods
Are You Entitled to An Impartial Jury of Your Peers in DC?