Gun laws in American continue to serve as one of the most hotly contested issues. Some on one side of the debate believe that all guns need to be criminalized, unless for security forces. In contrast, on the flip side, others believe they have a Constitutional right to own weapons and any regulation on that right would present an infringement.

As a result, different legislators have passed or failed a multitude of measures. This has made navigating the various gun laws in the country difficult since they change across jurisdictions. Where then do the gun laws for Washington D.C. stand? What requirements are there for carrying concealed weapons or restrictions on ammunition? How do they differ from their neighbors?

In Washington, D.C., surrounded by government buildings and federal officials, it comes as no surprise that there are relatively stringent regulations on the types, styles, and manners in which firearms are held in position.

Residents of the District are allowed to possess a handgun for self-defense purposes within their home and places of employment. It must be properly registered with the municipality. Carrying a concealed weapon is allowed in Washington, D.C., but only if the application process is filed and approved pursuant to D.C. Code 7-2509.02. 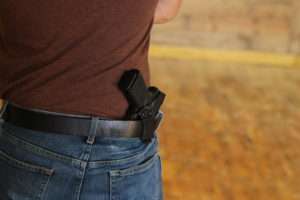 Given the number of law enforcement personnel in the jurisdiction, there are a varied of exemptions from the registration requirements, including any member of the military or government authorized to carry a weapon while on duty. Anyone who temporarily holds a firearm registered to another, while in the home of the registrant, is also exempt from penalty under the law.

The requirements for registration include a long list of personal background information to get a sense of the individual requesting permission to own a weapon. Outside of name, place of birth, employment, type of firearm, etc., there are more extensive components including descriptions of any case in which the applicant may have been involved in where a firearm was present, where the firearm is going to be kept, and even, “other information as the Chief determines is necessary to carry out the provision’s of the District’s gun registration requirements.”

Additional rules include a 10-day waiting period between the purchasing and acquisition of the firearm, regulation on high-capacity magazines, bans on assault weapons and machine guns, and limits on the number of handguns one can register (only one (1) over a 30-day period).

It should also be noted that open carry is illegal, as is the possession of ammunition, not for a registered firearm. This means that to have specific ammunition, it must be for the valid firearm registered to that individual. There previously were regulations on specific types of ammunition, even if for a firearm properly registered to that individual. However, these have been relaxed over the past few years, outside of 50BMG, given that these remain completely prohibited in Washington, or any armor-penetrating ammunition.

Despite sharing borders, there are some key differences people should know when it comes to carrying weapons across these boundaries.

Maryland is the most similar to Washington D.C., receiving an A- from the Gifford Law Center to Prevention of Gun Violence. Virginia received a D grade. It should be noted that Maryland allows some local regulation of weapons, which means that even with the state, there may be regulations that apply in one town or county but do not apply in another. Despite having similar rules, including types of weapons, wait periods for both purchases, and between individual firearm registrations, not everything carries over between Maryland and Washington D.C.

As such, those who may be licensed to carry or possess a weapon in Maryland may not be legally covered when doing so in Washington, D.C. It is important to make sure that in the case of using a firearm in Washington D.C. that is registered in Maryland, any required documentation is filed.

Virginia and Washington D.C. gun laws differ quite substantially. There is no background check required for the transfer of a firearm between unlicensed individuals, no bans on high caliber rifles or high-capacity magazines, no wait periods before the purchasing of a firearm, or even a requirement to report a stolen firearm.

Concealed carry must be done with a license. As a result of this, bringing in a firearm from Virginia into Washington D.C. could violate a variety of different district laws – as such, it is important to make sure any and all documentation, licenses, and laws are followed to prevent problems.

Arrested on a Gun Charge?

If you have been arrested or charged with a gun offense, like Carrying a Pistol Without a License, in D.C. or Maryland, contact Bruckheim & Patel to have one of our criminal defense lawyers take a look at your case and provide a free consultation.