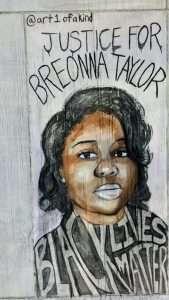 On March 13, 2020, 26-year-old Breonna Taylor, an African American EMT, was shot and killed by police carrying out a no-knock warrant on her Louisville, Kentucky apartment. The killing sparked months of nationwide outrage, Black Lives Matter protests, and calls for police reform, which resulted in the passing of Breonna’s Law, effectively banning no-knock warrants in Louisville and increasing the requirements for body camera footage for all warrants.

However, at the heart of these protests were calls for the three officers involved in the shooting, Johnathan Mattingly, Brett Hankinson, and Myles Cosgrove, to be arrested and charged with murder. Accordingly, Kentucky Attorney General Daniel Cameron summoned a grand jury of 12 Louisville residents, to whom he would present evidence in this matter. The grand jury, then, would decide whether or not probable cause existed to charge the officers.

On September 23, 2020, the grand jury’s findings were released. Brett Hankinson, who had been fired from the force in June, was charged with three counts of wanton endangerment because of bullets that went into the neighboring apartments. Neither Officer Mattingly nor Officer Cosgrove were charged at all.

Coming more than six months following Taylor’s killing, the decision recharged outrage across the country. In a press conference, AG Daniel Cameron explained that the officers were justified in using deadly force because they were fired upon first by Taylor’s boyfriend. The latter used a legally owned firearm to defend himself against what he believed to be intruders in his home after police forcefully entered in the night without announcing themselves.

Now, the situation has become mired in even more controversy. An unnamed juror has argued, via a legal motion, that AG Cameron did not, as he claims, present the totality of evidence to the grand jury. This juror alleges that the AG used the grand jury to “deflect accountability and responsibility” and that he planted “more seeds of doubt in the process.”

This myriad of controversy and confusion has called into question the practice of keeping grand juries secret. Regardless of this debate, however, it is crucial that everyone understands their roles and rights on a grand jury, should they be called to serve on one.

In the District of Columbia, to be eligible to serve on a grand jury, you must be a United States citizen, a resident of the District of Columbia, 18 years or older, and able to read, speak, and understand the English language. Disqualifying factors include physical or mental incapability, having a felony conviction or be pending a felony or misdemeanor conviction, or selecting certain answers on jury qualification forms, as each case dictates.

DC also codifies that jurors on a grand jury will receive fees and expenses for their time served, which shall be set by the Board of Judges of the Superior Court and will not exceed those awarded in Federal court. Similarly, DC Code stipulates that individuals receiving benefits, such as unemployment, will not have those benefits affected by jury duty. Additionally, an employer may not punish, terminate, or threaten to terminate an employee who must take time from work to serve on a jury.