When charged with driving under the influence in Washington, D.C., driving privileges can be revoked for a certain period of time, depending factors such as compliance with DUI chemical testing and prior offenses. In the District of Columbia, first-time DUI offenders are subject to 6 – 12 months license suspension. 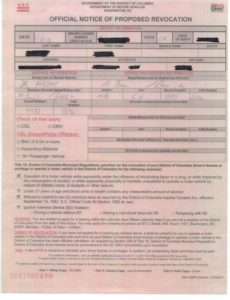 However, the DC DMV cannot revoke your license if another state issues it. In this case, the DC DMV can revoke a non-DC resident’s driving privileges inside the borders of the District but cannot physically take the license. The DC DMV can notify the state DMV that issued your license of the infraction, and the issuing state can take action based on their own laws.

DUI laws differ state by state, with some states imposing harsher penalties for first-time offenders. While other states offer a lower statute of charges. States such as Arizona, Georgia, and Tennessee have mandatory jail time for first-time offenders, while Wisconsin’s law designates a first time DUI offense as a civil infraction.

In Washington, D.C., there are three different statutes you can be charged with for drinking and driving: driving while intoxicated, driving under the influence, and operating while impaired. Not all of these offenses exist in other states, so if there is no equivalent statute in your home state, it may not affect your ability to drive in your home state.

Penalties in Your Home State

If you are charged with a drinking and driving infraction in D.C., your home state can find out two ways. First, the DC DMV may notify the DMV of your home state to allow them to take whatever action they see fit regarding your privilege to possess a valid license.

Second, the information will be put in the National Driver Register, a computerized database that contains information on all individuals across the country who have had their licenses revoked, suspended, canceled, or denied or who have been convicted of serious traffic-related offenses. Your state won’t be notified that you have been entered into the system, but an officer can access this information if you are pulled over or arrested.

Those who have driving privileges revoked by the DC DMV can schedule an appeal hearing. Out-of-state residents have 15 days after notice of revocation to schedule a hearing with the DC DMV Adjudication Services, where the arresting officer will provide testimony, and you can make an argument.

If granted a license reinstatement after revocation, the DMV requires you to go through the steps of obtaining a license again and pay a fine. If your license is revoked due to a drinking and driving infraction, the DMV will usually require additional conditions, such as an alcohol/drug counseling program, a negative drug test, or installing an ignition interlock device in your car.

During this process, you are allowed to have an attorney present. This is recommended because testimony given in DMV hearings can be used against you in a criminal case in D.C. To speak with a DC criminal defense attorney regarding your case, contact Bruckheim & Patel for a free consultation.

The Price of a Driver’s License
Is Sugar Dating Prostitution?