Over the past few decades, advances in forensic science have drastically altered the ways in which crimes, particularly violent crimes, are prosecuted. As any crime television show will portray, law enforcement will collect biological evidence from crime scenes, weapons, and victims in an attempt to prove their case. This science is still evolving and is not as clear cut as television programs make it seem.

How Does DNA Evidence Work?

The first time an American was convicted using DNA evidence came in 1987 when Tommie Lee Andrews was found guilty by a biological connection between DNA found in semen obtained from a rape victim, which was then connected to blood drawn from Andrews. Prior to this point, forensic science was not advanced enough to analyze DNA in a meaningful way.

Every person has unique DNA (deoxyribonucleic acid) that is embedded in their biological material. For example, DNA can be found in blood, saliva, hair, and semen. During the commission of crimes, particularly violent crimes, certain biological material is often left behind by the suspect. Forensic scientists will then recover materials in the hopes of comparing it either to a known sample in a DNA bank, or a sample obtained from a suspect.

Further advances in forensic sciences have also allowed low-level DNA to be collected from the crime scene. This type of DNA is left when a suspect has touched an item and left skin cells. Low-level DNA, also known as touch DNA, can be lifted off of weapons, doorknobs, or even the victim’s skin if they were in direct contact with the suspect. Regardless of the type of DNA, a reference sample is needed to prove that the DNA taken from the crime scene is in fact the suspect’s DNA.

DNA in Criminal Trials by the Government

Unsurprisingly, the process of analyzing DNA is incredibly complex and requires years of education to do so properly. Law enforcement agencies employ DNA analysts who have obtained the requisite education that allows them to analyze the DNA and compare it to that of the suspect. These analysts receive the DNA samples, run a variety of tests on it, and interpret the results.  How, then, does DNA get used in trials? 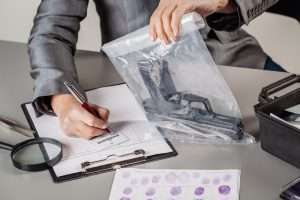 If the government intends to use the DNA in trial, they are tasked with explaining the process and results to a jury. Because the prosecutor in the case does not have the education required to adequately explain the evidence and cannot testify in court as a witness, they are required to bring in the DNA analysts themselves.

These scientists, employed by the government, then testify as expert witnesses. This essentially means that they will be asked to explain the collection process, the testing protocols undertaken, and explain the results in a way that someone without years of training can understand. Their testimony, however, is not the end of the story.

Just as the government has the right to bring in expert DNA analysts, the defense counsel can independently seek an expert. Defense attorneys may hire DNA experts to interpret the results, and the process of obtaining the results. This is often a crucial aspect of due process, as the government’s DNA expert adheres to certain protocols that are not above questioning.

The defense’s expert is brought into trial in the same way the government’s would be. They are expected to have the proper education necessary to understand the science behind DNA, and are then asked direct questions that will challenge, or shed doubt, on the results offered by the government.

As mentioned earlier, the science behind DNA and the processes used to collect the evidence are very complex and require an expert to understand them. Sometimes, however, the conclusions drawn by the expert employed by the government may be quite different than a conclusion drawn by an independent DNA expert. There are numerous ways the collection, and interpretation, of DNA may be flawed that the government’s witness may not report.

One such flaw may come from the nature of the collection. When DNA is collected from a weapon used in a crime, for example, a swab is run over various parts of the weapon. Using a single swab over a large area presents complications that an expert can testify to. Say, for example, a baseball bat is used in an assault. If a single swab is used on the handle and the end of the bat used to hit someone, it will be impossible to tell whose DNA came from which part of the bat. The government’s DNA expert may testify that the DNA was collected and there was a certain amount of the defendant’s DNA found. The prosecutor will lead the jury to believe that this shows the defendant’s guilt.

An independent DNA expert may be able to testify to the reality of this. That is, the DNA collection was flawed, and you cannot prove that the defendant’s DNA came from the handle and the victim’s came from the end used to hit. Expert witnesses may also be crucial in explaining transfer DNA. Secondary transfer DNA is when DNA is transferred from one object to another through an intermediary.

The collection and interpretation of DNA is a very complex science, requiring years of education. The government, in trying criminal cases, will frequently use DNA evidence when it is available. However, the expert testimony given by a government DNA analyst is not to be taken as fact. Adequate criminal defense counsel in DC often includes hiring independent DNA experts to interpret the results the government offers. In doing so, they can provide insight into the flaws in the government’s collection, analysis, and interpretation that can be the critical aspect in proving someone’s innocence.

The use of DNA evidence plays an important role to juries to comfortably deliver a guilty or not guilty verdict.

Washington, D.C. Pretrial Services
Is Texting and Driving A Crime in DC