As the Coronavirus pandemic is sweeping our nation, many of us find our daily routines disrupted by the new “social distancing” practices everyone’s being encouraged to uphold. However, there is much more going on besides having to cancel family reunions or business dinners.

The criminal justice system is being severely tested, and in the next few weeks, it will be made clear how the DC and Maryland courts plan to address these burgeoning issues.

What About Prisons and Jails?

across the country become infected. Prisons, by their nature, are cramped, crowded, and unsanitary. Seeing how the United States incarcerates more people than any other country in the world, these institutions are hotbeds waiting for infection.

More so now than in previous years, the prison population is aging, and jails and prisons are not prepared to combat a potential outbreak. This is especially true for DC. The DC jail is still bulging from the age of mass incarceration, and many prisoners are still scattered across the US in federal institutions due to overcrowding in the city.

Furthermore, prisons aren’t equipped to be medical treatment facilities, so what steps should they take to ensure Coronavirus doesn’t make its way into their ranks?

What Steps are Being Taken?

Some prisons and jails have begun allowing early release for non-violent offenders and at-risk inmates. In New Jersey, Chief Justice Stuart Rabner allowed the temporary release of up to 1,000 non-violent offenders, in hopes that it would reduce the risk of introducing Coronavirus into the prison population. The released prisoner’s sentences would either be on hold, or they could get credit for time served, up to the discretion of the judge.

Additionally, Iran released over 70,000 prisoners recently to combat the Coronavirus. While the US is certainly no Iran, it goes to show the lengths other countries will take to ensure there isn’t an outbreak in an incarceration institution.

Besides outright release, there are other methods the courts can use to slow the addition of new prisoners and protect the existing prison population. Already, DC has suspended in-person visitation and is working on a digital visitation system. The DC jail has also temporarily cut programming for inmates, meaning more cell time and less socialization. The courthouse is closed, only operating for emergencies. All pending jury trials, status dates, and arraignments are on hold. Pending warrants are also being suspended in Oklahoma, or dropped altogether, like in Maine. These extraordinary measures are being taken solely to reduce the number of individuals in a tight space at any given time.

Temporary CPOs are sometimes issued before hearings Seeing how the courts are on an emergency-only schedule, those CPOs are automatically extended, by court orders, with no hearings.

The sixth amendment guarantees the right of a defendant to a speedy trial. Today that might not be a reality for many people entering the criminal justice system. The courts are notoriously slow, with some people’s simple DUI cases taking months to complete. Now the backlog is being extended by the delays caused by the Coronavirus. It could be months before a regular flow of cases comes through the courthouse again. 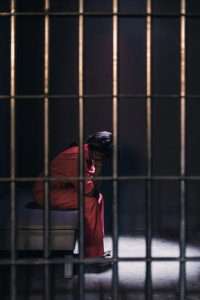 There’s a strong case to be made that this violates the sixth amendment rights of all the defendants out there, waiting three to four months for their cases to be heard, particularly in cases where an individual is held pending a trial. Should this violation be acknowledged, defendants will have their charges dropped.

Between the potential for hundreds of cases to be set aside, and the potential release of hundreds of prisoners of non-violent crimes, this virus might force a new mindset of criminal justice on not only the District of Columbia but all across the country. Corona may be the silver lining for justice reform in the age of mass incarceration.

Further complicating the backlog of cases is the fact that every day, people are being arrested for all sorts of crimes. Crime and the police haven’t stopped, even if the courts have. In an attempt to reduce this ever-growing clog in the courts, some have called for the police across America to issue more citation releases, and arrest fewer people.

Obviously, this isn’t applicable to a large number of offenses, but some action must happen to reduce the number of people entering the justice system, particularly for non-violent offenses.

These issues impact every court system across the nation. The dangers presented to incarcerated individuals, the massive backlog being generated in the courts, and the stress on every branch of the criminal justice system can be felt from DC to California.

The virus, and the implications it has for our justice system, are still in their early stages. The game will undoubtedly change within the next few weeks, maybe even days.

The most important part to remember is that none of us asked for this. The defendant waiting for their case is just as stressed as the judge facing months of backlogged scheduling, the corrections officer who hopes he doesn’t bring the virus to work every day, and the police officer who patrols our streets. We are all in this together.