Are You Required to Submit to a Breathalyzer Test in DC?

When most people get arrested for a DUI, they are nervous and do not know what they should do or say when interacting with the police. One of the main questions a person may have is: Are you required to submit to a breathalyzer test in DC?

The answer is no. Police officers must obtain a person’s consent to submit to a breathalyzer test after a DUI arrest occurs. However, if a person refuses to submit to a breath test in DC, his license may be revoked for one year, and the refusal could be used against him at trial as consciousness of guilt.

There is a fine line between cooperating with the police and ensuring that you do not provide evidence that could negatively impact your criminal case. One way to do this is knowing your rights and the consequences of submitting to a breath test.

When a person is arrested for DUI in DC, the police must read the D.C. Implied Consent Act, which states that any person who operates a vehicle while in DC gives his consent to chemical testing of his blood, breath, or urine to determine if he is under the influence of alcohol.

A person does not have the right to choose which chemical test to submit to, but the most common is a breath test. A person can object to a particular type of testing based on valid religious grounds.

A person has the right to refuse these chemical tests. The police should provide the implied consent form, and the arrestee can simply check the box that they do not consent without any further explanation. 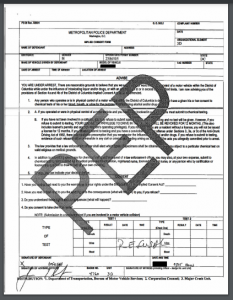 The only time a person may not refuse to submit to chemical testing is if an accident occurs that results in a fatality. In most of these cases, the police will request a blood sample at the hospital, which can only be administered by a doctor or nurse. If blood is taken, a person has the right to request an additional sample for private testing.

There are consequences for refusing to submit to chemical testing. The DC DMV can revoke a person’s license or his privilege to drive in DC for one year based on refusing to submit to a breathalyzer. However, this revocation is not automatic, like a law enforcement officer often insinuates after a DUI arrest.

At the hearing, the police officer who conducted the breathalyzer test must prove by clear and convincing evidence that the driver:

If the hearing examiner finds that the officer cannot meet this burden of proof, a person will not incur a loss of license.

Often, the law enforcement officer fails to appear for the hearing, and the hearing examiner cannot take any action towards license revocation. That’s why it is important to schedule a hearing within the timeframe to give you the best chance of not having your privilege to drive or license revoked, especially if you refused to submit to the breathalyzer.

Impact of Refusal at Trial

The government must show more than just the refusal to prove a person is intoxicated. Common indicators the government relies on are the alleged odor of alcohol, Standardized Field Sobriety Test performance, and any other observations the officer may make.

That’s why it is important to have an experienced drunk driving attorney to argue against this presumption. In most cases, the less evidence the government has against a person arrested for a DUI, the better. Even though refusing to submit to a breath test could have negative consequences, the benefits may outweigh the costs of the overall criminal case.

The Meaning of Alcohol Levels

If a person does submit to chemical testing (including breath, blood or urine sample), he will receive a score that indicates the blood alcohol concentration in his system. A blood alcohol content, or BAC, of 0.08 or greater, or a urine alcohol level of 0.10 or greater means you are over the legal limit to operate a motor vehicle in the District of Columbia.

DC has a zero-tolerance policy for individuals under the age of 21 meaning the presence of alcohol cannot be found in their system, otherwise a DUI charge will occur.

Even if a person’s BAC is less than 0.08, he can still be considered intoxicated and charged for DUI or OWI. Only when a person’s BAC is less than 0.05 of blood or breath, or 0.08 of urine is there a presumption that the individual was not intoxicated. This presumption is also rebuttable. But in this case, the shoe is on the other foot, so to speak.

Through other evidence, the government must prove that the person was, in fact, intoxicated without relying solely on the breathalyzer score.

What are the Consequences of Breath Test Refusal in DC?

Refusing a blood alcohol breath test results in penalties in the form of license suspension, restricted license, and criminal charges.

Your refusal to take a chemical test will be reported to the Department of Licensing, which might suspend your license for up to one year. If a driver has two prior convictions or refusals the second or subsequent offense results in loss of driving privileges of up to two years.

A third DUI conviction within 15 years can result in a license suspension of up to three years. CDL license holders face harsher penalties.

Upon license suspension, you can file for a restricted license, also known as a hardship license, that you can use with an ignition interlock device. Lastly, refusal to take a breath test can cause you to receive the maximum penalties following a DUI conviction, including jail time.

Do I have to take a Portable Breath Test (preliminary breath test)?

Unlike breathalyzer tests (evidential tests), portable breath tests are voluntary. Refusing these tests doesn’t carry consequences. However, the officer might take you down to the police station for a breathalyzer test.

Portable breath tests (PBTs) are hand-held mobile devices police officers use to test Blood Alcohol Content level of suspects during a traffic stop. It’s conducted alongside field sobriety tests which help the arresting officer determine if they should arrest you for a DUI or not.

Unlike a breathalyzer machine, a PBT isn’t reliable, therefore not admissible in court. However, some prosecutors find ways of introducing it in preliminary hearings to help prove the police officer has legal cause to arrest you.

Note: Taking a PBT doesn’t exempt you from taking the Breathalyzer test after an arrest.

Do Police need a Warrant to Take and Test your Blood?

A police officer does not need a warrant to get a breath sample for a breathalyzer test. However, if you don’t agree to a blood test, the officer must obtain a warrant.

The only time an officer can draw your blood for tests without obtaining a warrant is if they can prove there isn’t enough time to get one. In most cases, there’s enough time to acquire a warrant, and the officer needs to present a strong argument detailing why they believed they didn’t have enough time.

When comparing breath and blood samples, blood samples carry much information that the authorities can analyze and store. Breath samples only reveal information (blood alcohol level) pertinent to DUI cases, and blood tests reveal a lot more. Because of the intrusive nature of retrieving blood via a needle inserted through one’s body, courts ruled blood tests are more intrusive compared to breath tests; hence they require a warrant.

Often when a police officer suspects you are under the influence of drugs, they’ll run urine tests instead.

Is there a Viable Defense for Breath Test Refusal?

Drunk driving charges have viable defenses even when the evidence presented is overwhelming. Usually, the action of the law enforcement officer, equipment reliability, and your constitutional rights are called into question.

The Implied Consent law states an individual shall have deemed to have consented to a breath test as a privilege to drive. However, you have the right to decline a breath test after arrest, subject to penalties you may face at the DMV or in criminal court because of the refusal.

DUI defense attorneys can argue that you were physically incapable of taking the test, you misunderstood the officer’s request, or you thought you could take the breath test after talking to your defense lawyer.

If you have been arrested for DUI and refused to submit to a breath test, contact an experienced attorney at Bruckheim & Patel for a free consultation.

Are You Entitled to An Impartial Jury of Your Peers in DC?
Washington, D.C. Pretrial Services